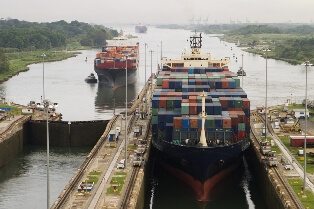 Thankfully the operations on the West Coast ports have been restored after a tentative agreement, but the question is: Will West Coast ports be affected in the future with container volume drops? Well the ILWU nine-month strike had a considerable impact to the economy; the dispute hurt businesses that rely on West Coast ports to move their products. The National Retail Federation said the impact on the US economy could reach $2.5 billion a day. Wal-Mart said port congestion threatened its spring and Easter inventory. The shipping delay cost for Perry Ellis is estimated to be $6 million, Ann Taylor $8 million. Gap Inc. said that port delays will hurt its bottom line in 2015 because less apparel will be available at its retail stores. Everyone will be affected because of the battle on the West Coast ports, not only business; shoppers too because at the end the losses that companies suffered during the dispute will be passed onto the consumer.

The lingering cost of disputes.

What is the Panama Canal and Gulf Coast doing to get prepare for this new increase in container business?

The Panama Canal has a project that has ambitiously planned to double the capacity of the canal by 2016; it is called the Third Set of Locks Project.

These expansions on the Panama Canal bring hope to the Gulf Coast ports of:

These cargo diversions will be a boost for the economy of the Gulf Coast, also local trucking companies will benefit from this because more local drayage will be needed to be move from these ports to local destinations and beyond.

Some Gulf Coast ports have already started improvements such as the New Orleans and Houston ports.  The New Orleans port is adding a near-dock intermodal rail terminal that will improve the capacity of the port. The port and New Orleans Terminal are investing $7.9 million in a refrigerated container racking system for more than 600 refrigerated containers. That will be a great benefit for agriculture companies that want to bring their products directly to the Gulf Coast.

The port of Houston is planning to improve its infrastructures in the next few years to ensure that they can provide accommodation to larger vessels and increased cargo handling once the Panama Canal expansion is open in 2016.

With these tips you should have a safe and pleasant experience using a freight service company such as Freight-Specialist. We recommend that you consult with us prior to having your shipment scheduled for pickup if you have any doubts or concerns.